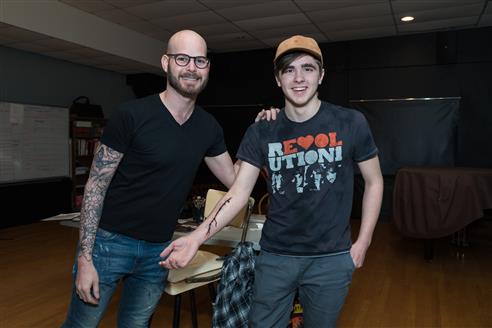 Brian Strumwasser demonstrated a make-up technique that resulted in a lifelike scar on Tyler Knabe’s arm, a LIHSA art student from the Massapequa UFSD.

Long Island High School for the Arts (LIHSA) students were treated to make-up demonstrations by hair and make-up artist Brian Strumwasser. An alumnus of the school, class of 2004, Brian shared his journey from LIHSA student to working artist to Broadway hair and make-up designer. He demonstrated various techniques for creating bruises and scars, impressing the students with his recent work for the Broadway production of The Crucible. He also helped transform a male actor to become the character Lola in Kinky Boots.

Brian took time from his work as the Hair Supervisor for A Bronx Tale on Broadway and Make-Up Designer for the National Tour of Kinky Boots, to meet with LIHSA art, theater and dance students.

Brian, who grew up in Plainview, is a New York based visual artist who also works in film and print. He’s worked with some of the most celebrated people in the entertainment industry and his work as a makeup artist has graced some of the most prestigious magazines and recently hosted his first solo art gallery show.

The Master Class program is part of the school’s ongoing mission to provide its students with inside looks at the industries they are pursuing, and to introduce them to mentors within their chosen field. Many of these classes are conducted by the school’s own successful alumni.

To learn more, visit www.nassauboces.org/LIHSA and like us at www.facebook.com/LIHSArts.