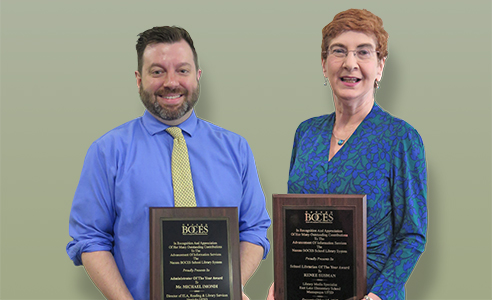 The Nassau BOCES School Library System (NBSLS) celebrates how school libraries enhance student achievement by highlighting the many services it provides to school districts throughout the county. They also recognize the vital role school administrators play in promoting and enhancing school librarians and their programs.

NBSLS shows its appreciation to school districts by presenting an Administrator of the Year Award and a Librarian of the Year Award to individuals who are considered models, supporters, advocates and inspirations in the field of librarianship.

This year the Administrator of the Year Award was given to Michael Imondi, Director of ELA, Reading & Library Services, K-12 in the Herricks School District. “Mr. Imondi has truly strengthened the library services in the district by helping to facilitate professional development, fund new programs and advocate for support staff,” wrote the school librarians who nominated him. Mr. Imondi started in the district in 2003 as a high school English teacher and assumed his current position in 2015.

The School Librarian of the Year Award went to Renee Susman, Library Media Specialist at the East Lake Elementary School in the Massapequa School District. “Being a librarian is not a job, it is who I am,” said Susman as she accepted her award. Ms. Susman became a member of the Massapequa School Library Department in 1986. Prior to that she was in the Hewlett-Woodmere School District for two years.