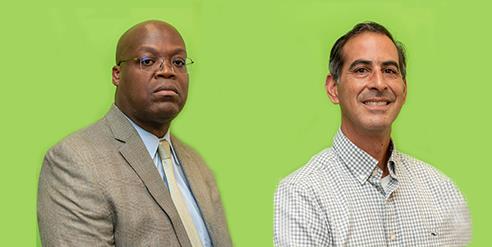 Captain Ceres John and business owner John Castro have joined the faculty at Nassau BOCES GC Tech. Cpt. John, who teaches Police Science and Criminal Justice, is a veteran law enforcement officer with the New York City Police Department (NYPD). He is highly accomplished in numerous areas of police work, including criminal analytics and risk analysis. Mr. Castro, who teaches Heating, Ventilation, Air Conditioning (HVAC) and Plumbing, owns and operates a successful HVAC company. He is a highly qualified tradesman with nearly 30 years of business experience, and a reputation for excellent service and quality construction.

Cpt. John began his career, which spanned more than two decades, as a patrol officer for several NYC precincts. He soon advanced into a leadership role as a sergeant, and then moved steadily up the ranks to sergeant supervisor, lieutenant, executive officer, commanding officer (CO), deputy inspector (DI), and, inevitably, captain. He served as captain of the Brooklyn North Investigation Unit and the 88th precinct, as well as both DI and CO of the NYPD Bureau of Internal Affairs.

As an active participant in the NYPD’s Office of Management Analysis and Planning, Cpt. John spent four months in Haiti training local police. He spearheaded an initiative in the Haitian National Police Department that helped to refine anti-crime strategies and increase productivity. In his work, he partnered with multiple advisors from the United Nations to improve the overall effectiveness of policing for the island nation

Cpt. John served as supervisor of youth services for the NYPD, where he led the department’s Explorer Program, coordinated field trips and volunteer opportunities, and prepared potential candidates for participation in national competitions. He holds both a master’s and bachelor’s degree in criminal justice from John Jay College, where he graduated as a Dean’s List Honoree.

In January of 2000, he launched his own business, Air Master LLC. For more than 20 years, he has been designing and installing HVAC systems for Long Island homes and business, as well as troubleshooting and repairing a wide range of refrigeration equipment.