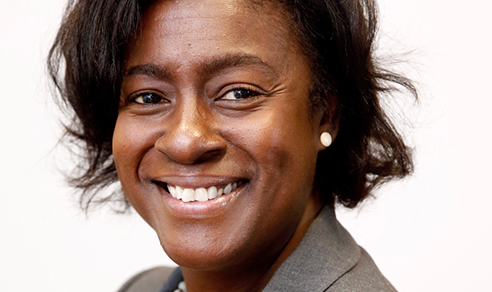 At the top of Ms. Cook McLaurin’s to-do list as a school leader is to further improve and expand the opportunities that students have to succeed. This goes beyond achieving a high school diploma or equivalency; it also means developing competitive career skills, instilling a sense of social equity, and empowering students to advocate for themselves, both academically and socially.

“I’ve fallen completely in love with the mission behind the work Nassau BOCES is doing with this student population,” said Ms. Cook McLaurin, who believes correcting misconceptions about students served by alternative educational programs is key to helping them succeed. “We cannot and will not leave these students for last.”

Ms. Cook McLaurin hopes ultimately to double the number of programs available to students through Specialized Schools. She sees this as a very realistic goal, achievable through collaboration among educators. “I work with people who are just as passionate as I am,” said Ms. Cook McLaurin, who describes herself as a Thought Partner. “Their role is every bit as important as that of principal. It is my job to help them realize the mission and vision they have for their students.”

Ms. Cook McLaurin began her career teaching English in the New York City school system. She served as an English teacher for eight years before becoming a Subject Matter Specialist for the Hempstead school district. From there, she moved into a leadership role as Assistant Principal of the George Meany School in the Bronx. In 2010, she became the Founding Principal of New Hope Academy Charter School in Brooklyn. In 2015, she came to Nassau BOCES in the capacity of Assistant Principal for Specialized High School Programs and before long was groomed for her current role.

Ms. Cook McLaurin has served at the helm of a number of educational and child-centered organizations, including: Cypress Hills Child Care Corporation, as Board President; East New York Urban Youth Corps, as Director; and East New York Beacon Program, as Coordinator.

She has also served as Instructor for Adelphi University and the City University of New York, as well as Curriculum Writer for New York University. She is a member of the National Alternative Education Association, the Oxford University Roundtable, the National Principals Leadership Institute, New York Historical Society Fellowship, and the Board of Directors of the UMOJA Network for Young Men.

Ms. Cook McLaurin holds a bachelor’s degree from Virginia State University and two master’s degrees from Adelphi University — the first in secondary education and the second in administration and supervision in technology. She is currently pursuing a doctorate of education in administrative and instructional leadership at St. John’s University.

“Kellie is all about students and how best to help them succeed,” said Judith Hynes, Executive Manager of Regional Schools and Instructional Programs. “Her approach is student-centered and she is focused on giving them the support they need to meet and exceed expectations. From the moment she came to us, she has rolled up her sleeves and pitched right in. She is a tremendous leader and an invaluable asset to our program.”