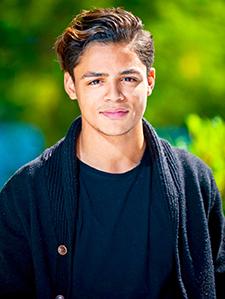 LIHSA alum Joshua DeJesus will star in an episode of the hit NBC drama Chicago Fire.

Joshua DeJesus, who graduated from Nassau BOCES Long Island High School for the Arts this past June, is currently enjoying an extremely successful freshman college year. In addition to studying acting with the Conservatory of Theater Arts, Purchase College at the State University of New York, Josh has already landed major roles in theater and on television.

This summer, Josh joined the off-Broadway ensemble cast of the classic urban musical Runaways. According to The New York Times, the production was “a pulsing reincarnation testifying to the atomic power of adolescent angst. Every other number feels like a rousing finale,” reviewer Ben Brantley observed. “But how are you going to keep a lid on a cast with this much natural talent and vigor?”

At the end of this month, Josh will star in an episode of the hit NBC drama Chicago Fire. He will portray Chris Brady, a troubled teen who has been abandoned and forced to live in a sewer, and comes to befriend firefighter Stella Kidd (series regular Miranda Rae Mayo). The episode is set to air on Tuesday, October 25, 2016.

Josh credits Nassau BOCES for giving him the ability to achieve such stellar success so early in his career. “LIHSA provided the perfect foundation,” he says. “Being in a place I loved where I could go and practice my craft every day was invaluable. The faculty gave me exactly what I needed to be successful. There was a lot of one-on-one work. I’m grateful for every teacher I had at LIHSA.”