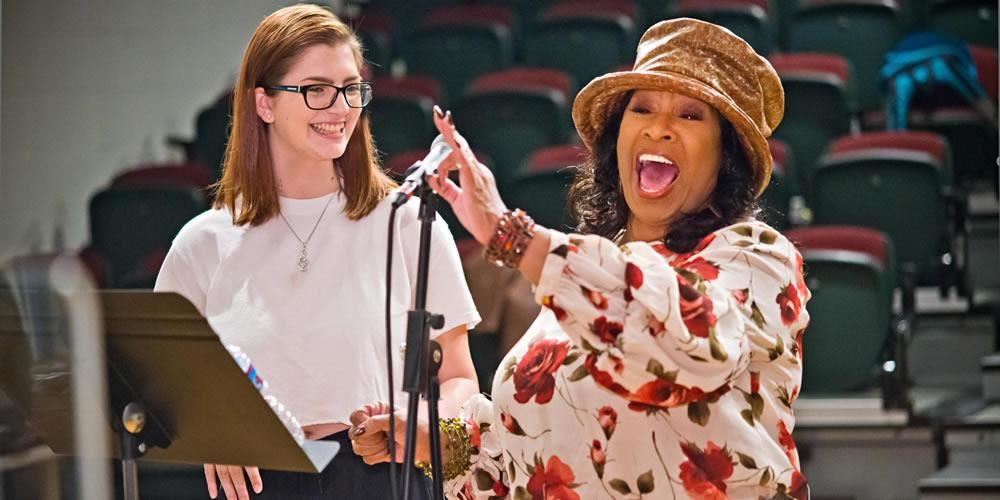 The Blues/Gospel/Funk class at Nassau BOCES  Long Island High School for the Arts (LIHSA) got a chance to jam and learn a bluesy style of music from classically-trained pop/jazz vocalist and songwriter Carole Sylvan, a teaching artist from Young Audiences Arts for Learning. She will be in residency at LIHSA weekly for the next two months. It’s part of the schools ongoing Master Class program.

Sylvan is a classically trained pop/jazz singer, vocal arranger, songwriter, and educator. At YA New York, she teaches Broadway, pop and jazz singing, as well as Glee Club and musical theater. Sylvan began singing in church and at the home of Count Basie, and at the age of 16, she opened up for James Brown at Yankee Stadium. She began her career as a classical singer attending Brooklyn Conservatory of Music and Juilliard School of Music. She has performed all over the world and recorded with numerous artists, including Aaron Neville, Peatbog Bryson, Toni Braxton, Rupaul, Natalie Cole, Jennifer Holiday, Patti LaBelle and many more. She performed vocals on multi-platinum song U2’s Rattle and Hum, as well as other movie soundtracks and commercials.

“The class went really well, they’re great kids,” said Sylvan after teaching her first class at LIHSA. “R&B, soul, gospel … it’s all about the feel of it, while they still have to stick to the music. And the singers up front are the storytellers. They were learning this.”