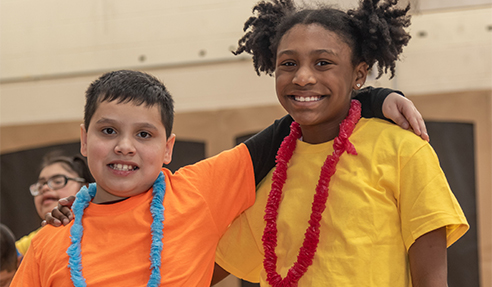 Nassau BOCES Rosemary Kennedy School students went “All Aboard the LIRR” as part of this year’s theme for the middle school science fair.  Part of the Jason Project, this experience helps schools to engage students in scientific thinking and activities.

Students learned about all the aspects of Long Island including landscape, topography and infrastructure as they took their imaginary trips on the rail road to the north, east, south and west of the island. Planning for the science fair started in October 2018 and culminated in a performance and interactive science fair in April.

“We are so proud of our students and staff for all the hard work they put into making this science fair such a successful learning experience for the school,’ said Principal Matthew Zegers.

Students ‘travelling’ to the north end of the island adopted two whales – Sirius and Crystal. Stirring pots and digging up crops to the tune of “Mashed Potato,” students visited the east end where farming began on Long Island.

The next stop was “Under the Boardwalk,’ by the Drifters as they went to the south shore beaches. The final stop was the western most part of the island where the chorus line donned sequined hats and I Love NY tee shirts.

After the performances, students participated in interactive science fair projects that included making trail mix as they hiked New York State, went on a scavenger hunt, learned about the lighthouses on Long Island, tested the effects of wind on sailboats and more.

A full-length mural of the LIRR and all its stops, designed and built by both students and staff, hung on the back wall of the science fair.

“There are beautiful places on Long Island and the students had the opportunity to learn all about their favorite places,” said Middle School teacher Christine Dwyer.