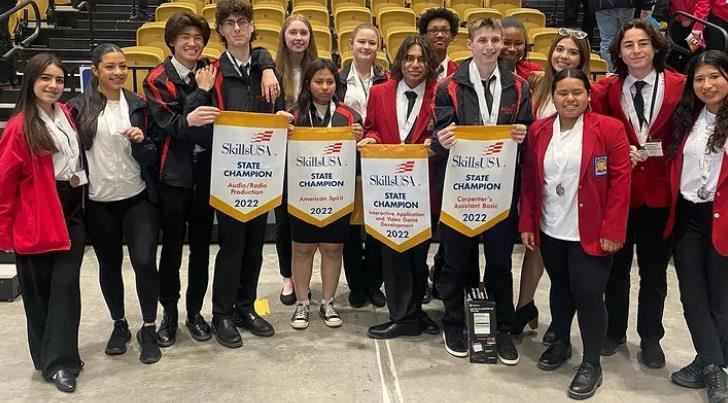 Sixteen students from Nassau BOCES premier career and technical education (CTE) high schools, Barry Tech and CG Tech, took top honors at the New York State SkillsUSA Leadership and Skills Championships, held in Syracuse earlier this spring. Students participated in a series of timed events related to their courses of study at Nassau BOCES, as well as in competitions in leadership and professional development. One student earned a distinguished office as a national delegate representing New York State.

Malverne UFSD student Alondra Diaz, who is studying Medical Assisting, took the top spot as a member of the American Spirit team.

Valley Stream CHSD student Kate Kalb, who is studying Medical Assisting, took the top spot as a member of the American Spirit team.

Considerable effort goes into qualifying for the annual SKillsUSA competition. These students have a double workload, not only completing their CTE assignments but also satisfying full courses of study at their home schools. Add to that the intensive training that it takes to earn the privilege of competing in SkillsUSA, and it becomes clear how tirelessly these students work.

The competition is part of SkillsUSA’s mission to provide our country with a competitive, skilled workforce. SkillsUSA is a partnership of students, teachers and industry leaders working together to prepare high school and college students to become leaders in the business world. The program helps establish industry standards for job-skill training and instills a respect for community service in its participants. The U.S. Department of Labor recognizes SkillsUSA as a “successful model of an employer-driven youth development program.”