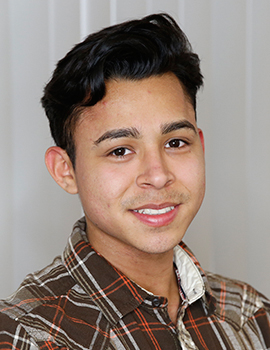 Hicksville High School student Steven Vasquez came to the United States from El Salvador in the tenth grade with only the most basic English skills. Within a year, he had completed the English as a Second Language (ESL) program, was proficient in English and commanded a great deal of recognition for his student activism.

In eleventh grade, Mr. Vasquez was nominated for the Angelo Del Toro Puerto Rican / Hispanic Youth Leadership Institute, a forum for students to share ideas and concerns that affect the Hispanic community. As a member of the Institute, he honed his natural leadership skills and became even more socially active. He was selected for the American Legion’s Boys State of New York program, where hundreds of students meet from across the state to debate a variety of issues.

Mr. Vasquez is so reliable and conscientious that he was chosen to escort Supreme Court Justice Sonia Sotomayor during her visit to Hicksville High School. Mr. Vasquez is an outspoken advocate of the proposed Development, Relief and Education for Alien Minors (DREAM) Act, intended to promote temporary-to-permanent residency for undocumented immigrants who wish to live in the U.S. He helped to found a Dreamer’s Club at his school, the point of which, he says, is “to help each other out.”

Civic-minded, as well as generous with his time and effort, Mr. Vasquez is a member of Natural Helpers, a club dedicated to students helping one another. As outspoken as ever, he helped to increase membership in the club by raising awareness in his community and encouraging others to become involved.

“Steven Vasquez is an exceptional young man and a role model to other students,” wrote his award nominator. “He is a survivor with the empathy to help others. His dedication and personal values have empowered him to overcome many obstacles. An ardent defender of immigrants’ rights, he has the confidence and intelligence to speak eloquently on any topic about which he feels passionate. He is the kind of person that other students often go to for advice or a friendly push to do better in school.”