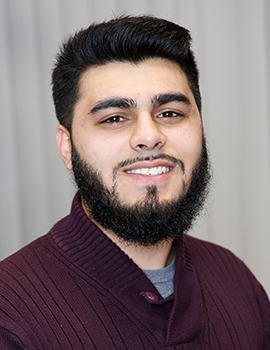 Faiz Kapadwala is an outspoken champion of career and technical education (CTE). He believes it is a critical component of public education and has delivered this message at the highest levels of government. He addressed the United States Congress in Washington, D.C., promoted CTE to the New York State Legislature and the State Education Department and served locally as an advocate for Long Island CTE students.

A trained peer mediator and educational activist, Mr. Kapadwala has served his community as a mentor and tutor at Hamza Mosque in Valley Stream and as a volunteer for the Nassau Anti- Bias Consortium, the Nassau County Chapter of Jack and Jill of America and the Memon Association of North America.

Mr. Kapadwala graduated Nassau BOCES Barry Tech in 2013 with honors. He was an esteemed member of SkillsUSA, the national organization for career and technical education students. A dynamic student leader, Mr. Kapadwala served SkillsUSA as President of Barry Tech, Area VI Delegate and Mediator for Conflict Resolution Training and as a member of the Long Island Region VI and New York State chapters. He earned the Annual Industry Advisory Recognition Award and served as a member of the National Technical Honor Society.

Mr. Kapadwala studied medical laboratory technology at Farmingdale State University, earning a Bachelor’s Degree in pre-med. He graduated Hewlett High School with honors, where he held a distinguished place on the High Honor Roll, was a member of the National Society of High School Scholars and earned the Washington Statesman Award. He is fluent in English, Urdu, Hindi and Spanish.

“Faiz Kapadwala continually and consistently models the highest level of professionalism, dignity and respect,” wrote his award nominator. “He has exemplified youth leadership, encouraging his fellow students to follow their passion for learning. He demonstrates a deep commitment to both his profession and his peers. Mr. Kapadwala is an alumnus of which all his alma maters can be proud.”