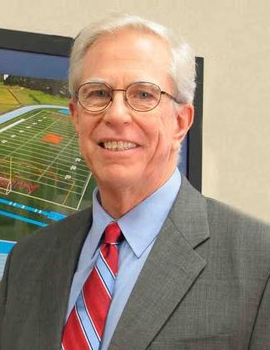 Dr. James Hunderfund has nearly 50 years of experience as an educator, more than 40 of them in a leadership role. Early in his career, Dr. Hunderfund took the position of assistant principal and steadily rose through the ranks in several districts, serving as principal, assistant superintendent and finally superintendent. Before taking the helm of the Malverne UFSD, Dr. Hunderfund held successful tenure as superintendent of the Babylon and Commack school districts. Malverne Schools have flourished under his guidance.

During his superintendency, Malverne High School was named a New York State Rewards School for the first time in history, made the National Achievement Honor Roll for Advanced Placement, was the only school in Nassau County to earn the National Policy Center’s Gold Award as a School of Opportunity and has been ranked among The Washington Post’s Best High Schools in the U.S. for the past five years. Herber Middle School was named a National Blue Ribbon School of Excellence, and Davison Avenue Intermediate School was recognized by the State of New York for Best Instructional Practices.

Dr. Hunderfund’s leadership model is a collaborative one, making the entire Malverne community partners in the educational system. As superintendent, he expanded district services to the community through an extensive volunteer program involving students, parents and residents. He developed a number of committees that bring community groups and the schools together, including the Superintendent’s Advisory Committee, consisting of civic leaders, residents and members of the PTA.

Dr. Hunderfund has earned the Suffolk County Superintendents President Award and the SCOPE Award for Outstanding Educational Leadership. He served as President of the Suffolk County School Superintendents Association and as a member of the SCOPE Board of Directors. He also served as Assistant Chairperson of the School Evaluation Committee and Progress Report Evaluator on the Middle States Association.

“Dr. James Hunderfund’s commitment to education on Long Island has made a positive impact on thousands of students throughout Nassau and Suffolk counties,” wrote his award nominator. “He has shown unwavering support of high-quality and challenging educational experiences for all. Dr. Hunderfund has demonstrated that he is truly an education partner in every sense of the word.”