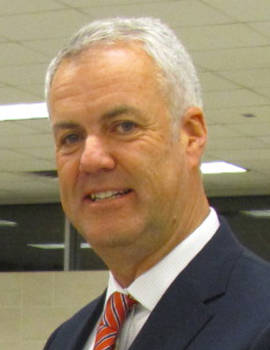 For the past 10 years, Michael Pomerico has made a positive impact on the quality and stability of Freeport Schools. He is a strong leader and gifted policy maker who is dedicated to realizing the district’s goals. As Board President, he is supportive of all Freeport educators, from his fellow board members and the district administration to the faculty and staff.

Mr. Pomerico has served as Co-Chair of both the Budget and Legislative Committees. He played a key role in garnering community support for the Qualified School Construction Bond and helped to create the Capital Reserve Funds that have enabled the district to bring significant improvements to its facilities at no additional cost to taxpayers. He has passed every budget during his tenure, garnering a majority vote of 82% in the most recent budget campaign. He has helped reduce school taxes for the past three consecutive years, while enhancing the district’s academic programs.

Under Mr. Pomerico’s stewardship, Freeport’s graduation rate has reached 84%, the highest it has ever been. He has expanded the advanced placement program, as well as dual enrollment classes, and with his guidance, instructional programs and educational technology have flourished.

Mr. Pomerico has been a tremendous advocate for Freeport schools at the state and local levels. He meets regularly with legislators and policy makers to champion fair, timely and equitable state aid and to discuss the issues impacting the cost of public education, such as unfunded mandates and the tax cap levy. He has led the Freeport Board of Education to join the legislative committee of the New York State School Boards Association, giving the district a voice on important issues, such as appropriate funding for English Language Learners and raising the limit on the unrestricted fund balance. He also persuaded the Board to join Reform Educational Financing Inequities Today.

“The biggest reward for me is the smiles on our kids’ faces,” Mr. Pomerico said. “Whether they’re being inducted into the National Honor Society, entering a robotics competition, winning a football or basketball game, or receiving a diploma, our students know that they are achieving their maximum potential.”