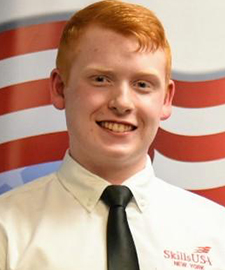 John is the Area VI Vice President for SkillsUSA New York. When he attended the National SkillsUSA Competition in Kentucky, the New York State (NYS) Office Managers were so impressed with John, they encouraged him to run for office. John prepared himself to lead his peers by attending every leadership training that he could. John has always been on the High Honor Roll and remains at the top of his class while performing his duties as a NYS Officer. His role as NYS Officer has also made him a better speaker. John is always helping someone with their projects on the shop floor in his Carpentry class or helping his classmates. He has a heart of gold. John sits on the Board for Camp Hope. He volunteers his time in several community organizations, because he feels it is important to give back to your community. John volunteers at HorseAbility. He made it possible for the organization to bring their miniature horses to the Barry Tech holiday party, held annually, for students at the Children’s Readiness Center, hosted by the Veterinary Science class.