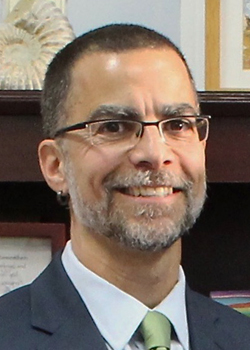 President
East Rockaway Board of Education

Building on 26 years of experience as an educator, Keith Gamache pursued his role as a leader in the East Rockaway schools with a passionate commitment to the district’s mission of inspiring learners to become self-directed, ethical, creative and globally conscious citizens. As a board member, he continues to remain on the leading edge of academic improvement, school governance and educational leadership.

Since he began his service on the East Rockaway Board of Education, Mr. Gamache has held the roles of Trustee, Vice President and currently President. In his six-year tenure on the board, he has helped to develop learning opportunities throughout the district. With his guidance, the district’s STEAM (science, technology, engineering, art and mathematics) program has expanded to the elementary level.

Under Mr. Gamache’s leadership, the number of East Rockaway students participating in career and technical education programs has increased by 200 percent. He has guided the district in expanding its advanced placement (AP) course offerings, adding art, computer science and psychology classes, as well as college level courses. At the same time, the number of students earning top scores on the AP exams has increased. There are also more extra-curricular and athletic opportunities than ever before for all students at all levels.

Mr. Gamache represents East Rockaway as a delegate to the New York State School Boards Association, working with school board members from across the state on critical issues, including education reform, and the impact of high-stakes testing on teaching and learning. Drawing on his roots as an original member of the district’s facilities committee, he helped to pass a recent bond referendum that funded improvements throughout the district, including bringing a running track back to the campus after more than a decade of being without one.

“Keith Gamache is a tireless advocate for our children,” wrote his award nominator. “He strives, through his leadership, to eliminate gaps in achievement, expectations and opportunity for all students. Mr. Gamache is always willing to give of himself to help others. He is a highly intelligent, dedicated and competent individual, who is well respected by students, colleagues and community members alike.”