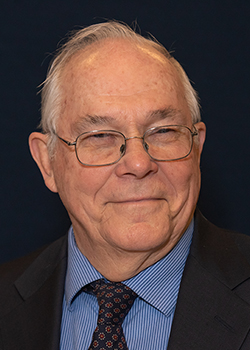 Daniel Christoffel is a celebrated artist who has earned both national and international acclaim as a portrait painter and sculptor. Yet his greatest passion is teaching, sharing his talent and skill with fledgling artists and helping them to bloom. In addition to his appointment as University Professor from the Office of the President at Long Island University, he has served as an arts educator in a number of Nassau County school districts.

Mr. Christoffel began his 50-year career in education as a teacher and artist in the Bellmore-Merrick CHSD. He was a champion of the district’s advanced placement art program, helping students to earn college credits, as well as scholarships to some of the most prestigious art schools in the state, all while still in high school. He also created a mentoring program in which students served as mentors to one another.

“Mr. Christoffel taught us with contagious enthusiasm in a classroom environment that was filled with cultural knowledge,” one Bellmore-Merrick alum recalls. “He made all of his students feel important and capable. With his encouragement, we competed in local and state art competitions and often won awards.”

Mr. Christoffel earned the Long Island Supervisors “Lifetime Achievement Award” from Adelphi University, and was named Teacher of the Year by a number of organizations including the Long Island Art Teachers Association, the Parent Teacher Student Association, the Kiwanis Club, and the Bellmore-Merrick school district. He earned the “People Who Have Made a Difference” Award as a member of the Calhoun High School Hall of Fame in the Bellmore-Merrick CHSD, and is a recipient of the Omicron Delta Kappa National Honor Society Award.

Mr. Christoffel holds a place of distinction on the Artist’s Registry at the National September 11th Memorial Museum, and two of his sculptures commemorating 9/11 can be viewed on the museum’s website. He has served as President of the Long Island Art Teachers Association, guest lecturer at the Metropolitan Museum of Art, Curator of the Partnership for Cultural Development, and a board member for the Art League of Long Island.

“Dan Christoffel is an outstanding teacher, mentor and friend to all those who are fortunate enough to know him,” wrote his award nominator. “His name is synonymous with excellence in art and education. He has influenced the lives of thousands of students over his long career, and his expertise and commitment have earned him distinction as an artist, an educational professional and a philanthropist.”