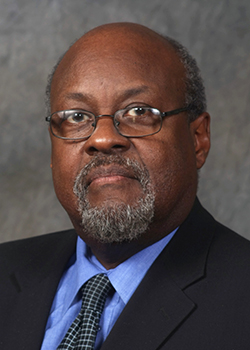 Before becoming a tenured professor in the Hofstra School of Education, Eustace Thompson was a lauded educational leader in Long Island public schools. He has served with distinction for nearly 40 years in urban and suburban public schools. He has held a number of leadership roles including assistant principal, principal, assistant superintendent and superintendent, and has served as a mentor to a variety of educational leaders.

Prof. Thompson has served as Executive Vice President of the Long Island Council of Administrators and Supervisors, and as a representative on the Instructional Television Service Committee of Channel 13 / WLIW Channel 21. A certified international curriculum auditor, he has served on more than 15 national audit teams. He has written several articles that have been published in a variety of professional journals, including the International Conference of Education, Research and Innovation publications.

Among his greatest public school successes was as Deputy Superintendent of the Uniondale UFSD, where he created the advanced science program at the secondary level. The program produced scholars who went on to become finalists in a number of state and national science competitions. Under his guidance, the number of Uniondale graduates attending four-year universities significantly increased.

Hofstra faculty and administration is impressed with Prof. Thompson’s combination of strong leadership skills and solid academic preparation. His contributions and reputation as an expert in educational diversity and inclusion have steadily increased over the course of his career. The university’s Center for Suburban Studies Institute honored him with the Celebration of Suburban Diversity Award for his work as a scholar and activist in educational diversity.

While at Hofstra, Prof. Thompson has served as Chairperson of the Foundations, Leadership and Policies Studies Department, as well as the Teaching, Learning and Technology Department. He has also served as Director of the Ed.D. Educational and Policy Leadership Program.

Prof. Thompson is the creator of Hofstra’s new doctoral cohort program, designed to prepare school leaders to reveres the decline of failing school districts and restore them to academic success. To date, more than 50 percent of the cohort’s candidates have earned doctorates. The cohort itself was the subject of an article in the Educational Leadership and Policy Journal, as well as a presentation at the University Council of Educational Administration’s annual conference.

“Professor Eustace Thompson is an expert instructional leader who is committed to the academic and social growth of learners of all ages across Long Island,” wrote his award nominator. “Over the course of his career, he has created countless learning environments that foster positive change. His significant contributions to generations of students ensure that his legacy will be a continuing culture of academic excellence.”