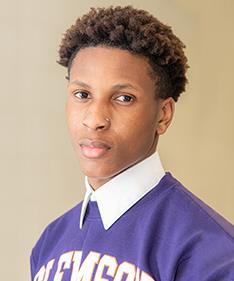 Ryan is a talented athlete who splits his time between track and football. When he was scouted by Clemson University, his self-advocacy was as important as his athletic ability. When meeting with Clemson’s athletic director, he confidently shared his own expectations of what the university would offer him and negotiated the amount of his scholarship

Ryan has a passion for music and music production, and is studying audio production at Barry Tech. He is devoted to his musical growth and works hard to advance his music career, which is meeting with significant success. He has developed a substantial social media following, with more than a million views. He uses his platform not only to advance himself, but to help other artists promote their work. Supporting and helping other artists to succeed is just as important to him.